This post may contain affiliate links. We may receive a small commission at no cost to you if you make a purchase. read disclosure.

The Sunshine Coast is one of Australia’s hottest destinations, with white sandy beaches, charming villages and world-class wineries.

But if you’re looking for a break from the beaches and city life, then a trip to the pristine Noosa Everglades is the best way to do it. 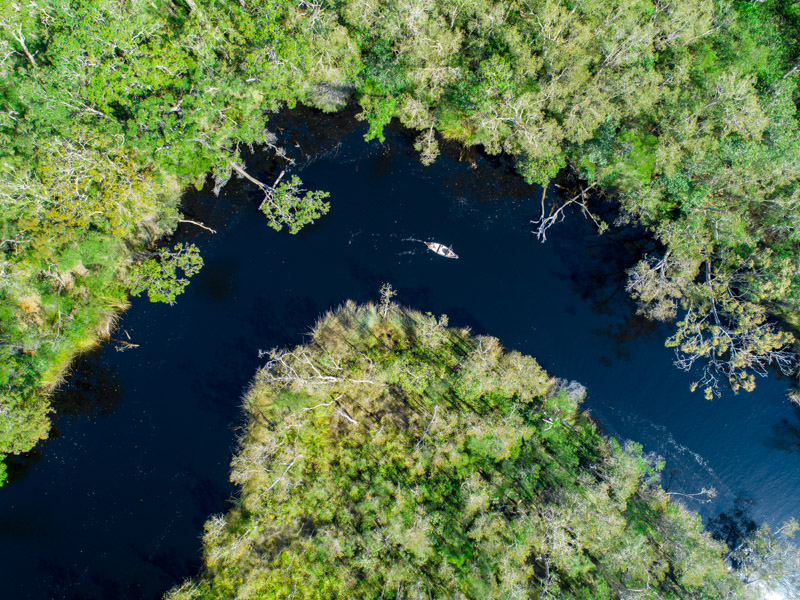 These tranquil waterways lie alongside ancient, thriving rainforest and tall grass, and are famous for their reflective, crystal-clear waters. It is one of Australia’s most diverse ecosystems and most pristine wetlands.

Meandering down the rivers and waterways is one of the best ways to escape the stresses of everyday life.

But how do you visit the Noosa Everglades and what makes them so special? Find out everything you need to know about this one-of-a-kind Sunshine Coast attraction in this complete guide.

What are the Noosa Everglades? 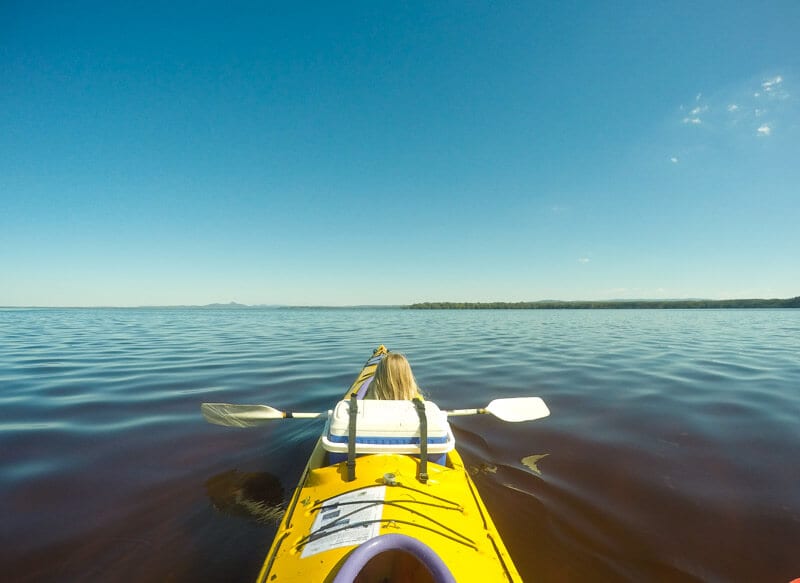 The Noosa Everglades are a series of waterways and tropical wetlands and swampy areas that connect the northern Noosa River system to the ocean near the Sunshine Coast.

The Everglades are nested within two UNESCO Biosphere Reserves, the Noosa and Cooloola regions of Great Sandy National Park.

It covers an area of ​​60 km and is also known as the River of Mirrors because of the amazing reflections in the water. 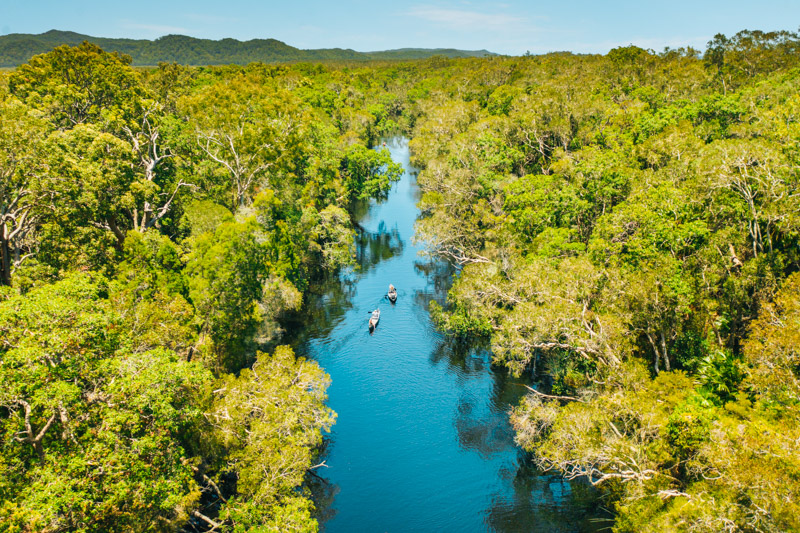 The Everglades are known for their lush plant life and rich flora, as well as thriving wildlife. The traditional owners of the land, the Kabi Kabi Aboriginal people, were one of the few tribes less likely to migrate from the Everglades because of the fertile land and abundant resources.

It is also said that 40% of Australia’s bird species can be found in the Noosa Everglades and it is the only Everglades system in Australia (and one of two in the world) where you can safely swim because it is crocodile free!

Keep an eye out for rare wildlife including rare bird species such as the glossy black cockatoo, pelicans, cormorants, ospreys, eagles and more.

How to get to the Noosa Everglades 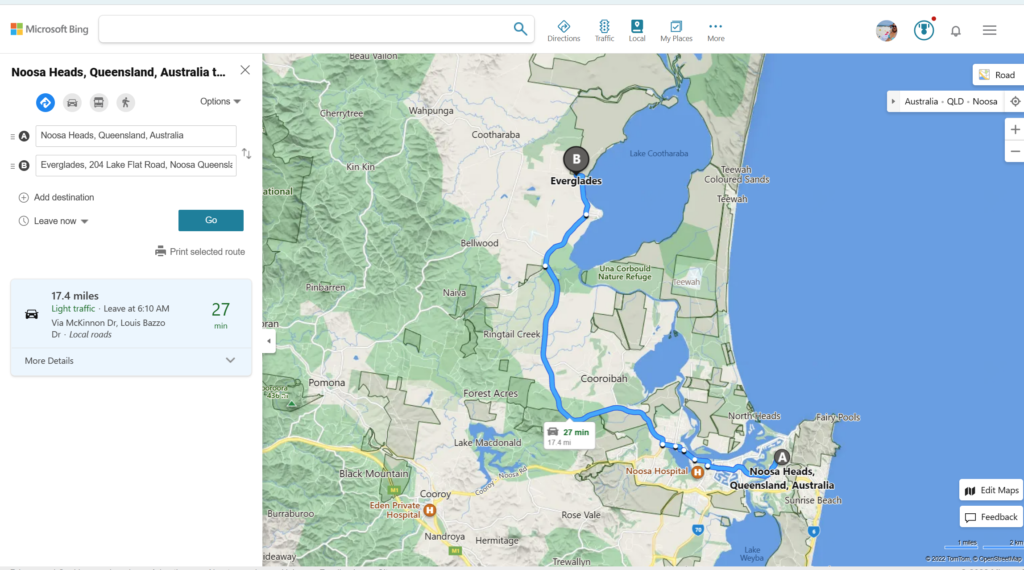 The Noosa Everglades unite a vast region just outside of Noosa, but the best area to explore the Everglades is Boreen Point, a small village in the Noosa Hinterlands that sits on the shores of Lake Cootharaba.

Boreen Point is a 30-minute drive from Noosa Heads or 90 minutes from Brisbane. Its proximity makes it the ideal day trip from the Sunshine Coast or Brisbane.

At Boreen Point you can rent kayaks and canoes, go kite surfing, explore in your own boat, or take boat trips and self-guided tours.

Ways to explore the Everglades from Noosa

Visiting the Everglades from Noosa is one of the top things to do in Noosa and should not be missed on any Sunshine Coast itinerary. 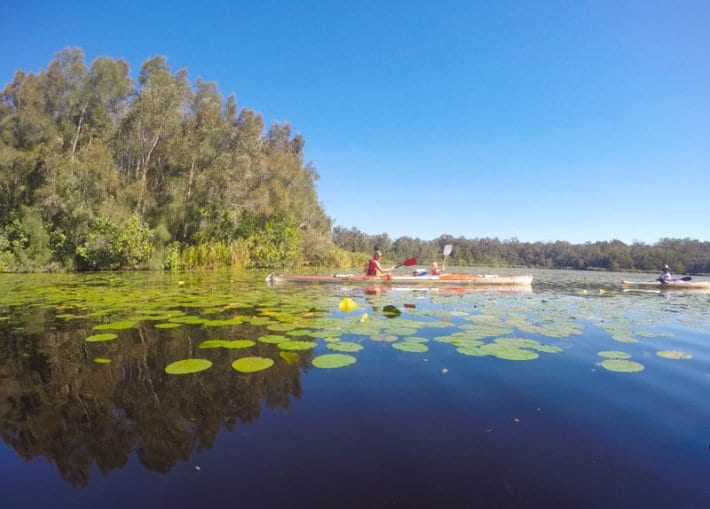 Kayaking in the Noosa Everglades is one of the best ways to explore the narrow waterways because you get so close to the crystal clear waters with minimal disruption to the unique environment. take only photos, leave only waves.

It also keeps you fit!

We opted for a 16 km round trip from Lake Cootharaba which took us into the middle of nowhere in a pristine natural setting with only the sounds of the birds flying and the water lapping against our boat and the lily pads.

If your biceps tire you can pause for a moment and enjoy the stillness, occasionally broken by birdsong. 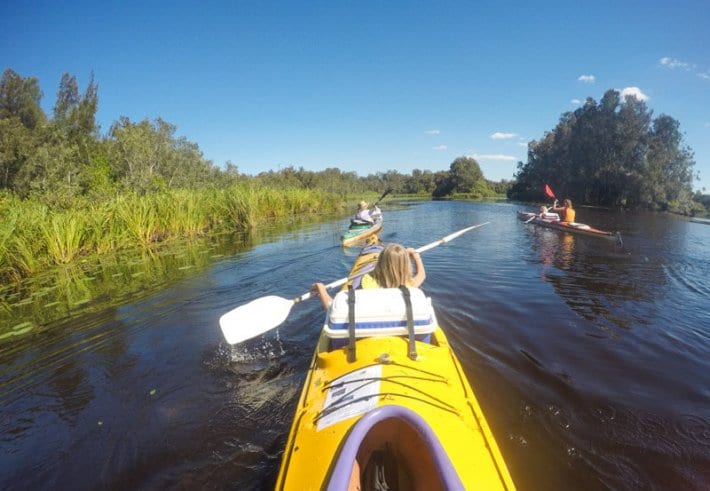 It’s one of my favorite experiences in Australia. We hardly saw another soul while we were out on the water.

You can take self-guided kayak tours from Boreen Point to the Noosa Everglades, which takes around 5 hours of paddling round-trip, including breaks to rest and take photos.

If you’re looking to take your adventure to the next level, you can pack the kayak with your bush camping gear and head out on a 3-day wilderness adventure. 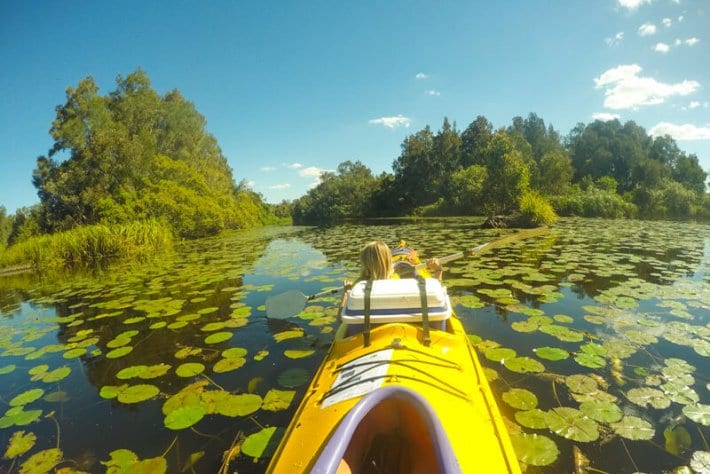 Or you can combine a short kayak trip with a boat tour if you don’t want to paddle too long. 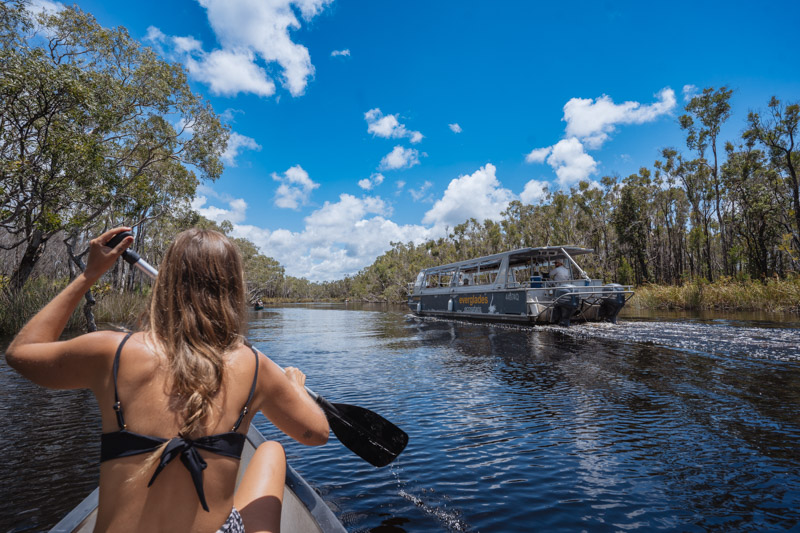 If you prefer a more relaxed way of exploring the Everglades from Noosa, consider taking an eco-safari cruise through the Everglade waterways.

These purpose built eco boats have been designed to have minimal impact on the environment without compromising passenger comfort. Wide-open viewing windows give each passenger a good view of the reflective water and surrounding flora. 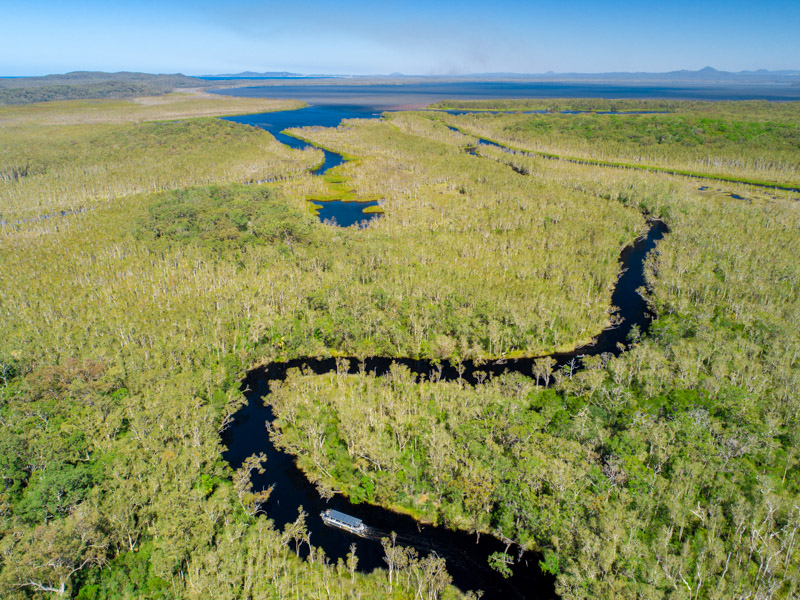 The ships sail calmly and gently through the calm river.

Sit back and sip sparkling wine or beer while your expert guide provides expert commentary on the land’s history and uses on an afternoon cruise.

After the boat ride, you can swim in the water or visit the Habitat Ecocamp to see the gray kangaroos.

Camping in the Noosa Everglades 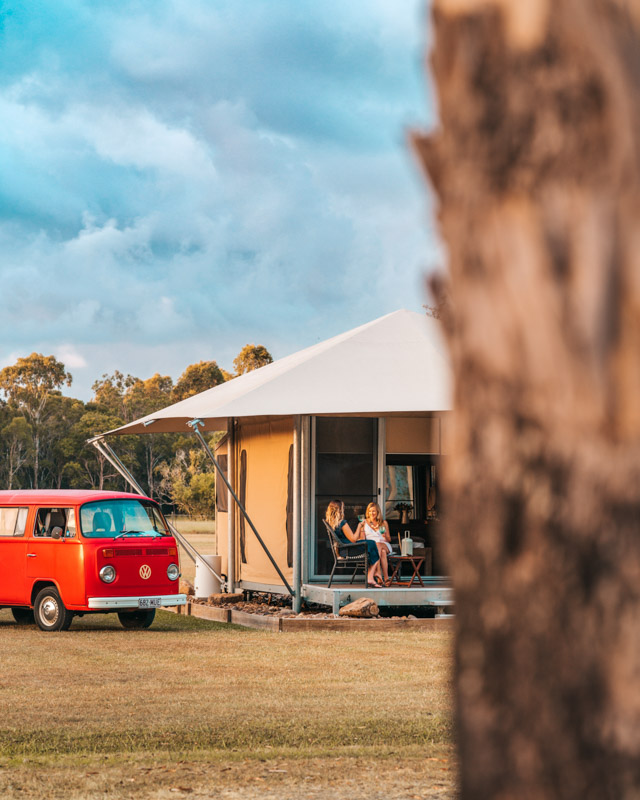 Camping is another popular way to experience the Everglades. The best place to camp is on the shores of Lake Cootharaba.

There are two popular campsites on the lake, the first being Habitat Noosa which offers a range of powered and unpowered campsites so you can head out with an RV or pitch a tent for a rural experience.

The campground has 65 acres of bushland and 500 meters of beach allowing you to experience the best of the Noosa Everglades and Noosa Beaches all in one.

Habitat is an eco camp, meaning there is no noise after 10pm and campfires are kept in designated areas. It also has a kitchen that visitors can use.

Another popular campground on the shores of Lake Cootharaba is Boreen Point Campground. It is similar to Habitat Noosa in that it offers powered and unpowered campsites and has designated campfire zones.

If you’d prefer to stay in nearby Noosa, scroll through the accommodation options below. One of Australia’s most popular seaside resorts, Noosa has all the amenities and attractions you need! 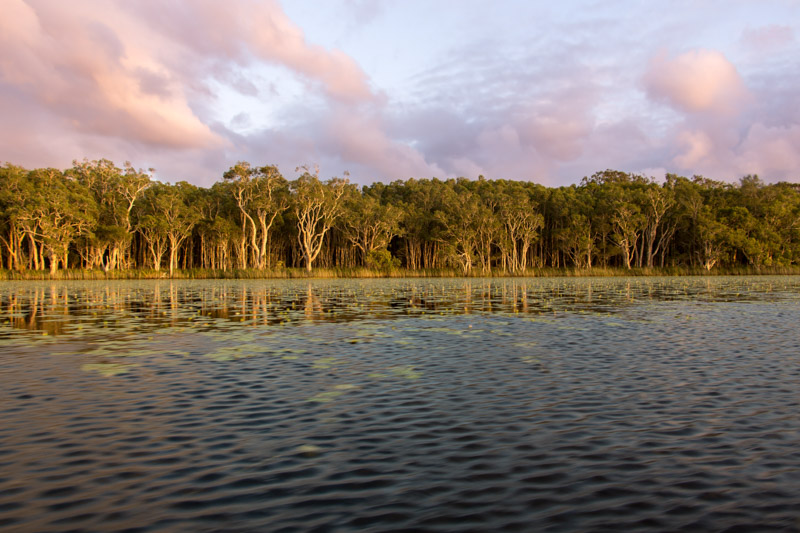 Are there crocodiles in the Noosa Everglades?

No, there are no crocodiles in the Noosa Everglades. It is one of only two Everglades in the world without crocodiles or alligators (the other is in Florida’s Everglades system).

Can you swim in the Noosa Everglades?

Yes, it’s one of the few Everglades in the world where you can safely swim without fear of crocodiles.

Are there sharks in the Noosa Everglades?

Bull sharks have been sighted in the Noosa area but generally stay near the lower reaches where the river meets the ocean.

Are there snakes in Noosa?

Yes, you can find red-bellied black snakes in the Noosa area, which is a venomous snake. If you see a snake, keep calm and walk away slowly. Snakes don’t usually attack unless provoked, so leave it alone and you should be fine. 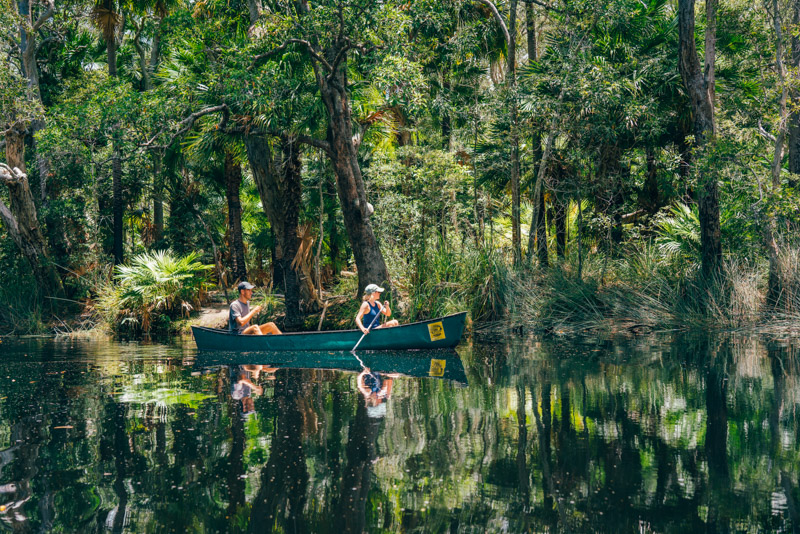 The Noosa Everglades was a highlight of our trip into the Noosa hinterland. Being able to switch off and enjoy nature is one of the main reasons to visit the Everglades.

Before you go, make sure you bring plenty of water and sunscreen. Please also remember to take your rubbish with you or to throw it in the rubbish bins provided at the campsites.

The Noosa Everglades are known for their environmental concerns and for keeping the waterways clean. So please help contribute and clean up after yourself.

And most importantly, have fun exploring the Noosa Everglades!

Swim with manatees and other encounters in Florida’s Crystal River

Swim with manatees and other encounters in Florida’s Crystal River 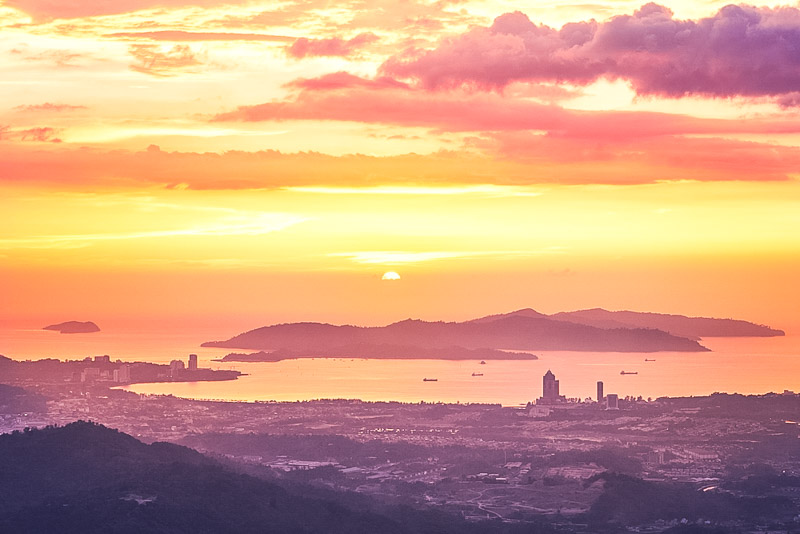 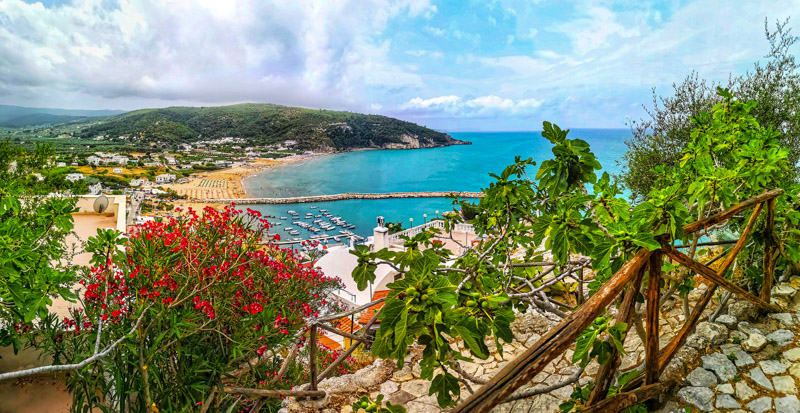 5 easy steps to create a great one 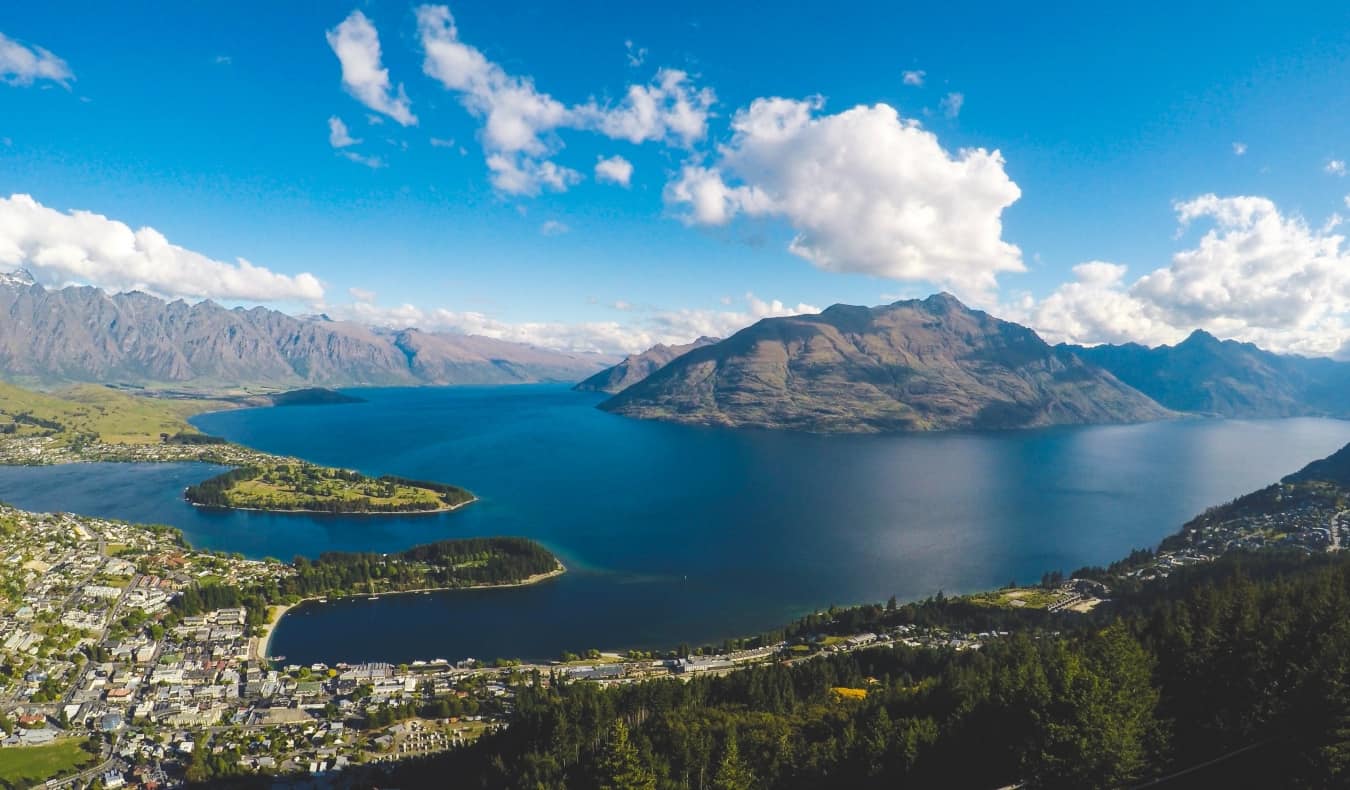 The 6 Best Hostels in Queenstown (Updated 2023) 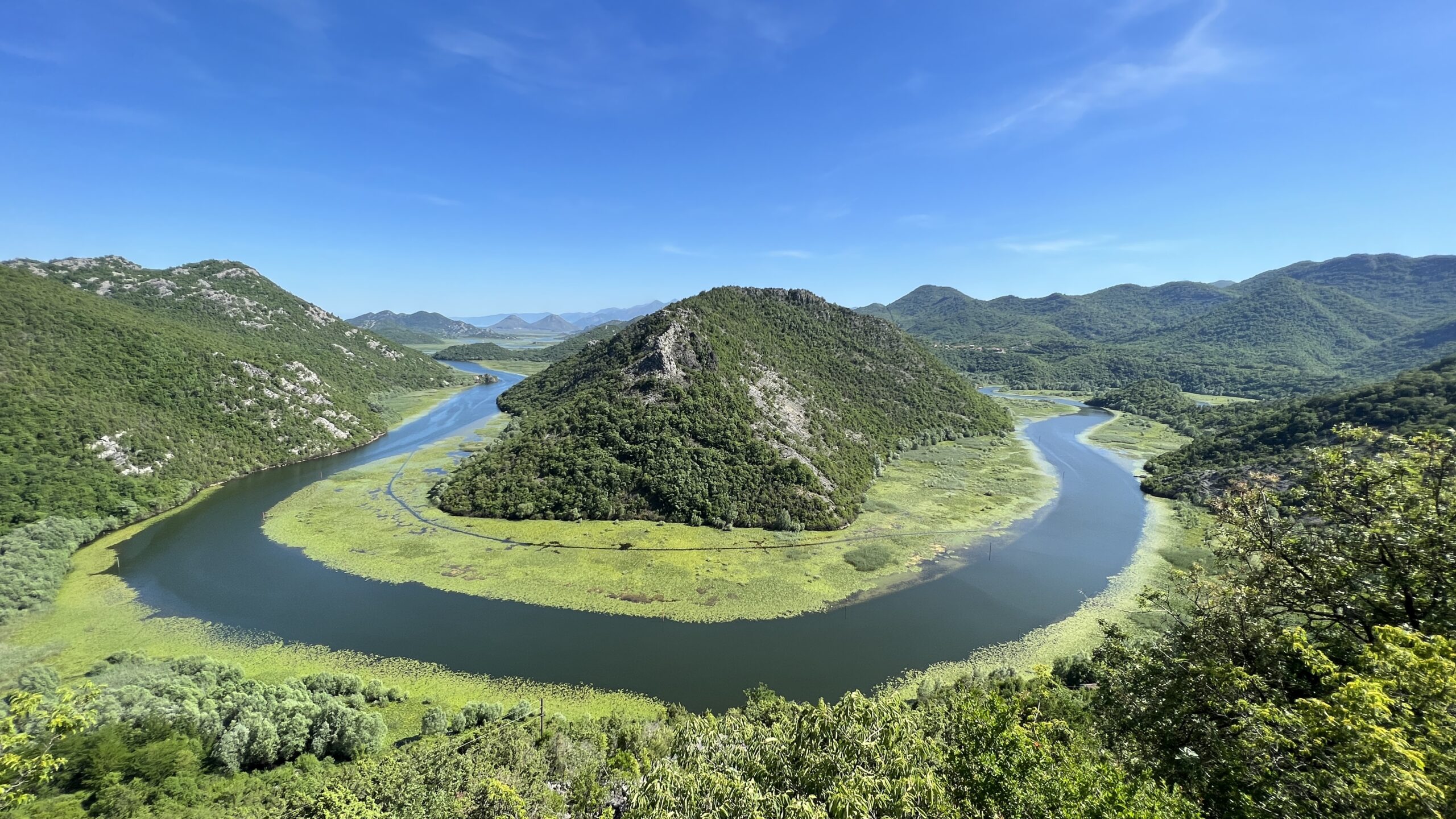 10 amazing things to do in Montenegro